Unwrapping the Servant: Kids Can Serve

Beyond a doubt, it was the most life-changing, eye-opening, heart-awakening 6 weeks of my ministry life. As an assignment in my first Masters of Education course, I was challenged to put together a new program for kids where I could map the difference that occurred during the time it ran (and I had permission from this state university to tweak all my courses toward children’s ministry). What I came up with was a 6-week course that would focus solely on helping kids see their ability to be servants of Jesus, no matter how old they happened to be.

The group was made up of 9 second graders. They signed a contract, as did their parents, that they would attend all 6 sessions, which would run 2.5 hours each Saturday morning. Our entire focus during that time was around serving. I wasn’t teaching Bible skills, or presenting a Bible story, or helping them memorize scripture.

In order to evaluate any changes that happened in the kids, I conducted a pre-test and a post-test. These were identical tests, each containing the same 10 multiple choice questions. In addition to the choices of answers, they were always given a blank space to write in their answer if they didn’t see it there. These tests turned out to be incredibly revealing!

Before we talked about anything on the first day of Unwrapped (the name of the program), I administered the pre-test. The children were instructed to get to a private place and answer the questions as honestly as they could. They would not be graded, and there were no wrong answers. On the last day of the course, I administered the same test with the same instructions. These were not anonymous, because I wanted to be able to compare and note any changes that had taken place during the 6 weeks. The results were mind-blowing!

On the question “How old should you be to volunteer to help in your town?” the pre-test answers were all over the place, but all the answers were much older than their age at the time. On the post-test, every child answered their own age. They still weren’t sure about being able to help at a younger age, but because they had experienced helping in their community at their present age, they had a new confidence.

Another question was “The reason I offer to help someone is” and all the children answered one of two choices in the pre-test: “They will pay me” or “My parents tell me to.” There was a drastic difference in their post-test answers where all of them chose “They need help and I can do it.” That’s not just about learning a new set of facts; that’s about developing a new worldview.

A third example is where they were asked “How many times can you think of that you served someone this week?” In the pre-test none of them could think of an instance when they took the initiative and helped someone that week. In stark contrast, in the post-test each child had a specific number. As I observed them answering their 10 questions, they noted on their fingers and counted deliberately as they recalled their week. Every one of them could identify times when they served that week.

The changes were not temporary. This was the beginning of a new way of looking at their faith and how it could impact the community around them, whether that was at home, school, church, town, or places on the other side of the world. One of these kids now works with inner city youth. Another is an elementary teacher at a school that is hard to staff because of the immense dysfunction of the entire school population. All of them are still active in their local church and still have a deep faith, which is unusual because they’re 24 years old now.

Why was Unwrapped such a success? Because I’ve done it dozens of times now, these are my thoughts.

It was intentional. All 6 weeks of lesson plans were in place before we began. I could see where we were going, which enabled me to keep every aspect of our time together focused on serving. The kids’ thoughts weren’t trying to process different spiritual disciplines at the same time. I could lead them further in a shorter amount of time because I was intentional about the subject being presented.

It required their commitment. In signing a contract, the importance and significance of their involvement was increased. Every second-grader was invited to participate with full knowledge of what they were committing to and how high the bar was set. It made being involved pretty special in the eyes of all the kids who were not taking part.

Every project came directly from the kids. I did not tell them what projects they were going to be doing. This immediately gave them a sense of ownership, while developing their leadership and administrative skills. I provided them with a variety of resources that exposed them to all kinds of needs. Although many needs they were considering required large amounts of money, I tried to steer them towards projects where they helped by being personally involved. It was beautiful to watch God touch their hearts in different ways. It became obvious that some kids were easily excited by needs in faraway places, while others wanted to be face-to-face with the person they were helping. As a group, they determined one week what their project would be for the next week. There were 4 main service projects with the guidelines that they had to have one project for each of these 4 areas: home, church, community, and world.

Needless to say, I learned a lot, got an “A” on the project, and am still taking groups of kids through Unwrapped. I had no idea that those 6 weeks were going to be so powerful!

After 33 incredible years in children’s ministry within the local church, Tina thrives on being able to train those who share her passion for reaching kids for the Kingdom. She is a member of the Kidmin Academy faculty, focusing on early childhood ministry, and hosts a 17-week Early Childhood Ministry elective. Tina has authored 18 books, one of which is used as a textbook in some universities (but it’s not boring). She loves … really loves … spending time with her 3 grandkids who give her tons of ideas to use in kidmin and refer to her as Silly Grandma. Check out what’s happening with Tina at tinahouser.net. 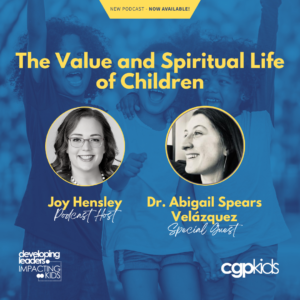