Children’s Ministry Verse of the Year

Legend tells us that the great modern thinker and physicist Albert Einstein was once traveling on a train bound for New York City. As the conductor came through the car, punching the tickets of each passenger, he approached Mr. Einstein to do the same. Einstein frantically searched his pockets but was unsuccessful in locating his ticket. He searched the pockets of his pants, each pocket in his coat, and the compartments of his case, unable to produce the ticket.

The conductor looked at him and said, “Dr. Einstein, I know who you are. Everyone on this train knows who you are.  Do not worry about your ticket. I am sure you purchased one.” Believing he had sufficiently assured Einstein, the conductor then moved on.

After punching the tickets of several other passengers, the conductor noticed that Einstein was still searching for his ticket, but this time on his hands and knees searching the seats around him. The conductor hurried back to him and said, “Dr. Einstein! Really, you do not have to worry. It’s not a problem. I know you purchased a ticket.”

Einstein looked at him and said, “Young man, I too know who I am. What I do not know is where I am going?”

Do you have a clear sense of where you want to go? Are you moving toward a specific destination, away from a situation? Perhaps you are sitting with no purpose or direction?

International Children’s Ministries has a clear sense of where we want to go. We envision an ideal future. It’s one where trained ministers to children are actively engaged in reaching, discipling, and serving children and their families in every community, of every state or region, of every nation of the world. For decades our team has worked tirelessly toward this goal, educating the Church on the spiritual value of children, offering training to those who serve kids, and developing resources to equip these ministries.

“Commit to the Lord whatever you do, and he will establish your plans” (Proverbs 16:3, NIV).

To commit something to the Lord means that we entrust it entirely to Him. Other common words for “commit” include pledge, devote, give or dedicate. In return, his Word promises that He will establish the plan. In other words, He will provide a firm foundation, bringing validation and approval when our plans are in alignment with His will. So, how can we fulfill Proverbs 16:3?

The Hebrew word for commit means to “roll.” When we commit our plans to the Lord, we literally “roll them onto Him.” Can you picture a man who is trying to roll a heavy, large object? Do you see him straining trying to keep it rolling forward? It’s hard work, especially when he comes to a slight incline, let alone a mountain. You and I similarly have things that we must accomplish, both small and large. God calls us to accomplish these things for Him, but He never intended for us to do them alone. He invited us to pursue them in relationship and dependence on Him, in a way in which He receives honor and glory. We do so, by rolling these heavy loads and burdens onto Him.

To be frank, I know our task in International Children’s Ministries is large. There aren’t enough days to accomplish all we’ve been given or to pursue every invitation to train children’s leaders. Our funding is insufficient for all that we are seeking to accomplish. Not everyone values this ministry or prioritizes it in the work on local or national levels. These obstacles could seem insurmountable, but Our God gives us this beautiful invitation to “roll” all of the plans onto Him and see what He can do. What might you need to “roll” on Him today?

In the days ahead, our team will begin feverish preparations for another exciting new year of ministry. We will confess those times we have relied on our own strength, pursued our own agenda, and been anxious in shepherding this ministry. We will be asking the Father to establish His plans for us personally and as a ministry, as we wholeheartedly depend on Him.

Thank you for joining us on this journey to fulfilling our mission and purpose. We firmly believe what we do has significant impact on the immediate health of the church, as well as the future vitality of our movement. Help us pray that His will be established as we faithfully seek to commit ourselves and this ministry to Him. 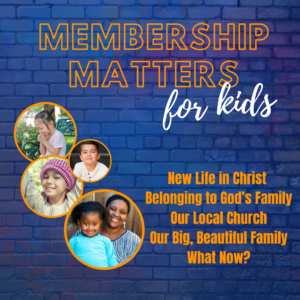