Bishop Vidal performs the duties of general oversight for South America. South America is a continent situated in the Western Hemisphere, mostly in the Southern Hemisphere, with a relatively small portion in the Northern Hemisphere. The continent is also considered a subcontinent of the Americas. It is bordered on the west by the Pacific Ocean and on the north and east by the Atlantic Ocean; North America and the Caribbean Sea lie to the northwest. It includes twelve independent countries—Argentina, Bolivia, Brazil, Chile,Colombia, Ecuador, Guyana, Paraguay, Peru, Suriname, Uruguay, and Venezuela—and French Guiana, which is an overseas region of France. The South American countries that border the Caribbean Sea—Colombia, Venezuela, Guyana, Suriname, and French Guiana—are also known as Caribbean South America. 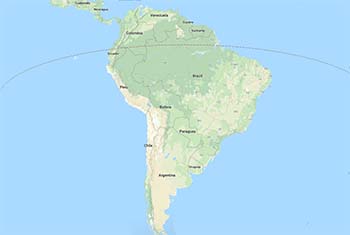