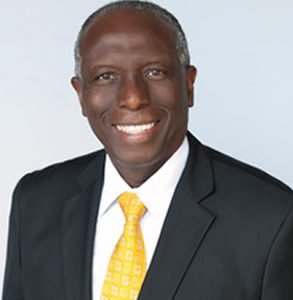 Bishop Clayton Martin is an International Presbyter who performs the duties of general oversight for the church worldwide and particular divisions or world regions of the church. General Presbyters working in context with the General Overseer serve in day to day matter with the General Overseer and help moderate the Assembly and other business sessions.

The Caribbean is a crescent-shaped group of islands more than 2,000 miles (3,200 km) long separating the Gulf of Mexico and the Caribbean Sea, to the west and south, from the Atlantic Ocean, to the east and north. From the peninsula of Florida on the mainland of the United States, the islands stretch 1,200 miles (1,900 km) southeastward, then 500 miles (800 km) south, then west along the north coast of Venezuela on the South American mainland.