Influencing The Influencers: Getting Grandparents In The Game

Back in my youth ministry days, I was always a little disappointed to hear that youth workers ranked pretty low on the list of “top spiritual influences” in the lives of teenagers. But it was true. Researchers found that parents, not youth workers, were at the top of the list.

Next came grandparents, then other extended family members and close family friends. Pastors and  children’s and youth ministry leaders did show up on the list of spiritual influencers—but far below parents and grandparents.

So, later in my youth ministry career, I turned my attention to helping parents leverage their well-deserved position of influence in the lives of their kids. I conducted parenting seminars, wrote books on parenting, and championed parent ministry in the local church. I did this for more than 20 years.

Strangely, it never occurred to me to help grandparents as well—until recently. That’s probably because I am now a grandparent. And it’s also because I have discovered that grandparents are for the most part a forgotten, marginalized resource in the church.

I did a Bible study a few years ago on grandparenting and learned that the Bible does not marginalize grandparents at all. Instead, it has a high view of grandparents and gives them a very important role in the lives of their grandchildren. One good example is found in Deuteronomy 4:9 (NIV):

Only be careful, and watch yourselves closely so that you do not forget the things your eyes have seen or let them fade from your heart as long as you live. Teach them to your children and to their children after them.

The key word in that last sentence is the word “and.” We aren’t finished when our children grow up and leave home. The Biblical pattern is for God’s people to teach at least two generations (children and grandchildren) the stories of our faith and the greatness of our God.

Another example is Psalm 71:17, 18 (NIV): “Since my youth, God, you have taught me, and to this day I declare your marvelous deeds. Even when I am old and gray, do not forsake me, my God, till I declare your power to the next generation, your mighty acts to all who are to come.”

This verse kept me going in youth ministry for a long time—I became “old and gray” at a young age! But this verse applies directly to grandparenting. In most cases, when the Bible speaks of the “next generation,” it is referring to our immediate families. “All who are to come” is a reference to our children’s children, namely our grandchildren, as well as our great-grandchildren.

Throughout Scripture, you find that grandparents (often referred to as elders, forefathers. or ancestors) are viewed as crucial to God’s plan of salvation for the whole world. Grandparents are given the responsibility for making sure that the baton of faith is passed from generation to generation.

Sadly, many grandparents have bought into the modern-day notion that their golden years should be spent in retirement, leisure, and self-indulgence. They simply don’t have time for the grandchildren. Their teaching days are behind them. Or they see themselves as a free babysitting service. “Our job is to spoil the grandkids and then send them back to their parents.” We show up at birthday parties but that’s about it.

But grandparents on the sidelines are missing out on a great opportunity and God-given responsibility to make a huge difference in the lives of their grandkids. Grandchildren will listen to their grandparents when they won’t listen to anyone else.

What if we could mobilize the more than 30 million Christian grandparents (in the US alone) to take more seriously their role as spiritual leaders in their families? What if those grandparents were intentionally committed to teaching their grandchildren about the love of Christ? How many children do you think this would impact?

Most older adults I know don’t get too excited about the senior-adult ministries that are offered in their churches today. They really aren’t looking for another senior brunch or bus trip. But they will get very excited about a church that takes them seriously and offers them an opportunity to get back in the game. Let’s help grandparents become intentional Christian grandparents who are uniquely positioned and equipped to share the Good News about Jesus with the people they love the most.

For more information on how to start a grandparenting ministry at your church, visit the Legacy Coalition online at legacycoalition.com.

—By Wayne Rice, co-founder of Youth Specialties and the Director of Conferences for the Legacy Coalition. 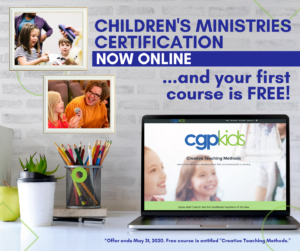