Thy Will Be Done – Amen?

And they said, “Come, let us build ourselves a city, and a tower whose top is in the heavens; let us make a name for ourselves, lest we be scattered abroad over the face of the whole earth.” – Genesis 11:4

In the book of Genesis, building a city was the equivalent of building a kingdom where one could rule and “be someone,” have fame, reputation, or power—make a name for oneself. The Tower of Babel was there to protect from attack, but at the same time it served as a religious stronghold, a place where you defend a belief, or an idol, or a leader, or an ideal. They said—all together, remember?—one language, one speech? “Let us” build it, with the new materials “we’ve” discovered. “We are so advanced,” they thought, so superior, so important, “that our tower will reach to the heavens.”

Maybe “reaching the heavens” was a way of saying that their gods would be impressed with their architectural endeavors and they would earn a few plus points to contribute toward their success to becoming someone. Whether they intended to literally climb the ladder to success, or achieve it through high society, they hadn’t counted on opposition from anyone strong enough to halt their success.

They were trying to go up, but they could not. But He who was up could easily come down because He is actually everywhere. Now, however, He comes down to intervene, to take part. Apparently He had not been invited, or they wouldn’t have gone that far with their nonsense. But we see that the blueprints of the city already under construction, and the Lego tower, with its stick-glue reinforcement, were right before the Lord God’s eyes.

Have you ever worked with someone who is insistent, calculating, stubbornly determined to get his own way, someone who pushes and shoves, manipulates and maneuvers until she arrives at her selfish goal? Anyone that gets in her way will be eliminated from the scene, bulldozed under with her blood-thirsty weapons of hate, even if they supposedly do so in the name of God. It makes me think of Hitler, Stalin, Mao Zedong, Saddam Hussein; from all continents, races, tribes—religious leaders and atheists—in every era of history.

Of course we tend to associate those bad guys and girls with the people out there, across the seas, that belong to “isms” other than our own; communism, atheism, socialism. But perhaps you or I are among those pushers and shovers that see no other way than our own, stop at nothing less than a finished tower.

Now imagine an entire group of people, the “whole earth,” united together. One language and one speech. Together they decide to do something, and they won’t stop until they reach the highest level of achievement. “Nothing they propose to do will be withheld from them”; words pronounced by God himself.  Unity sounds picture perfect, but that depends on where unity leads, and who is doing the leading and what they are uniting to do. People united to do evil are an extremely horrific thing. It appears there is no way to stop them.

God, however, could stop them. He has always stopped evil. He will always stop evil. And eventually, there will be no evil to stop within the Kingdom of God.

“Come, let us go down and there confuse their language, that they may not understand one another’s speech” (v.7). The people had said “Let us make bricks … let us build.” I can just see the politician running for office. “Let us create this and that department and then let us build a new nation.” Campaigning to get mutual support. But God had his own “Let us” plan. “Let us go down  . . .” Whether this refers to the Trinity, or to the host of collaborators that God would use to fulfill his plan, it is a joint project.

God does not remain indifferent and aloof from our self-destruction, ignorance, or self- righteousness, thinking we can do things on our own and that making a name for ourselves will make us happy. Just as Jesus Christ did centuries later, God leaves His heavenly home and accompanies us on our journey of faith, even when we are headed for a precipice.

“Let us go down and confuse their language.” What a merciful gift from God, to snatch up these naive and weak-minded simpletons (to put it nicely), and save them from a sure recipe for long-term failure. There is a saying, “fools rush in where angels fear to tread”, and this foolish plan would have guaranteed idolatry, godlessness, dictatorship, slavery and oppression for indefinite time. Confusing their way of communication was loving discipline. Ps 55:9 says, “Lord, confuse the wicked, confound their words, for I see violence and strife in the city.”

Maybe we could all use a bit of confusion now and then to keep us from implementing witless projects and schemes that, even though we think we are so modern and clever, might actually being killing us. Better to not understand each other, but understand God. Then he will bring real unity, based on wise and loving principles and eternal values instead of momentary frenzies.

“So the Lord scattered them abroad from there over the face of all the earth, and they ceased building the city” (v.8). Just what they didn’t want, but just what they needed. Maybe they were afraid, maybe they thought their plan was better, (as silly as it was). Maybe they weren’t strong enough to go against the status quo. Maybe they were comfortable where they were. Maybe they had little faith to believe their efforts would not be recompensed after their death, so why bother: “Eat, drink and be merry for tomorrow we die.” But now that God broke His silence, and spoke, no one understood Him and no one agreed with Him, but somehow they knew He had spoken. The spell was broken. Though they didn’t understand God, not really, neither did they understand each other. All Greek to me! Their one language and one speech were over. Confusion abounded. And their city made no progress, it deteriorated, fell apart.

The confusion God brought was an intelligent and ingenious tool to enable their minds to hear with their hearts. From this point on, God calls Abraham and Sarah, who step by step would learn to understand his strange heavenly language and ignore the confusing babble that had so fascinated the people before. The next chapter of the story of God follows immediately after the Tower of Babel and it is of God himself unifying a people called by his name. Doesn’t that make sense?

And the story comes to a close in verse 9: “Therefore its name is called Babel, because there the Lord confused the language of all the earth; and from there the Lord scattered them abroad over the face of all the earth.” The name Babel, bab-ili in the Babylonian literature, meant “the gate of God,” as we saw with their tooth-pick tower on tippy toes reaching upward toward heaven. But in Hebrew it resembles the word for confusion, bavel, a fitting name. But Father God didn’t leave them in confusion forever.

There is a happy ending to this story. God is always blessing, or making happy, saving from danger, from death, from sin, as a loving parent rescuing their toddlers from their frolicking and revelry, from their boisterous playing. He leads them to a life of purpose, a life with permanent consequences, a mature life of edification within a community of like-minded God-followers. He even teaches us his divine language and we learn to hear his message. Our cities made of cardboard, or brick and tar, are to be abandoned for a city built with living stones like you and me, built on Christ the rock that will not totter, a city where confusion is replaced with understanding, where unity is never imposed but won through fellowship with a loving God, and fortified by the fellowship of the saints. 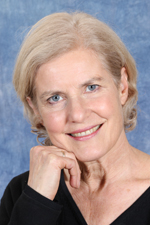 There is a command in Matthew 28 that says, “Therefore go (be scattered) and make disciples (people who understand what is taught) of all nations (even those outside of Shinar), baptizing them (dying with Christ to life instead of settling for pseudo-comfort) in the name of the Father and the Son and the Holy Spirit (“Let us come down”), teaching them to obey everything I have commanded you (a much better plan). And remember, I am with you always (the Lord, the ever-present God), to the end of the age.”

This article appeared in the July 2017 issue of The White Wing Messenger, the official publication of the Church of God of Prophecy. To preview or download the issue, click here. For an annual print subscription, click here.